Basketball has many intricate rules and regulations. The International Basketball Federation has done a nice job of teasing out the most basic rules and explaining them, along with defining some of the key basketball jargon. Read through the content and links below to learn about the game and its rules. 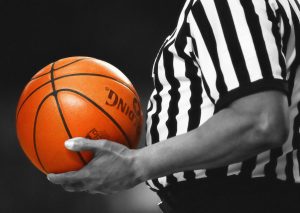 Next, check out rules from the NBA’s website; specifically read through the following:

1. Rule No. 3 – Players, Substitutes and Coaches

Free throws are shots when in a player is fouled in the act of shooting. A free throw shot is also taken when the other team is over the foul limit, putting the offensive team in a bonus “1 and 1” situation:

As an example, suppose a player drives the basketball, pulls up to shoot, but on the way down is fouled by the defender. Also suppose that the ball went into the basket during the play. The player is awarded 2 or 3 points, depending on where the shot was attempted, plus an additional free throw. Thus, theoretically, a 4 point play exists when a player attempts a 3 point shot that goes in but is also fouled. Making the “And 1” free throw will result in a 4 point play.

Ch.1 - Basketball by UGA PEDB Program is licensed under a Creative Commons Attribution 4.0 International License, except where otherwise noted.